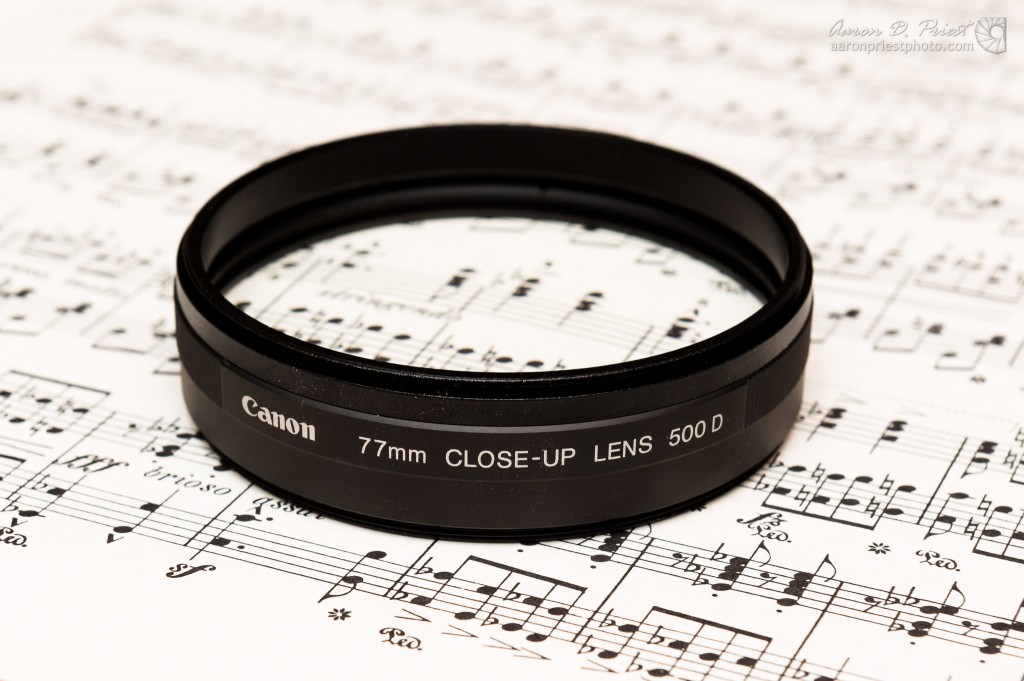 I found a really good deal on eBay for a Canon 500D close-up filter for macro shots. It’s much cheaper than a dedicated macro lens and lots of fun to use. Here are some of my first photos with it around the house.

These images can be purchased through my gallery here:
http://galleries.aaronpriestphoto.com/Arts-and-Crafts/2012-08-15/

I put a reversing ring on the front to mount it backwards. It seems to work better mounted normally for flat surfaces like sheet music and reverse mounted for 3D objects like flowers, bugs, etc.

It’s really useful on a telephoto lens when your minimum focus distance doesn’t allow you to get close enough to your subject for magnification. For other purposes, an extension tube would offer more magnification (but have some light loss). Since I’m already using a 2x teleconverter to turn my Nikon AF-S 70-200mm f/2.8 VR II into a 140-400mm, I didn’t want to add an extension tube on top of that, and yet I was still 40″ away from my subject (measured from the front lens element). This close-up filter cuts it down to 14″ so I get really nice magnification at 400mm. And it was cheaper than a dedicated macro lens.

Here are some very informal, quick measurements to show the magnification and minimum focus distances with and without the filter on two of my lenses.

This is my Nikon AF-S 24-70mm f/2.8 at 70mm and it’s closest focusing distance, about 8-3/4″ from the front lens element. It allows for very good close up shots. In fact, adding the close-up filter really didn’t gain much magnification.

The closest I can focus the Nikon AF-S 70-200mm f/2.8 VR II at 70mm is about 39″ away from its front lens element. And since it’s a longer lens that puts the camera even farther away too. The scene looks almost like my 24-70mm at 35mm because I’m 30 more inches away! Of course, the perspective and compression of the scene has changed, so a wider angle lens held closer is not always the photo you want either.

In fact, zooming into 200mm still does not give the same magnification as my 24-70mm does because I’m still 39″ away. Now, if we had shot the same subject 10 feet away with both lenses obviously the telephoto would be filling much more of the frame due to its zoom, but since I can’t get as close due to minimum focus distances, what happens if we put a close-up filter on the telephoto?

Aha! Now we are getting closer. The minimum focusing distance has gone from 39″ down to 14″.

At 200mm on the 70-200mm lens we have about the same magnification as the 24-70mm did at 70mm, but we have 7-1/2″ of more distance or working room between the front lens element and the subject. This is important to not scare away little bugs (or avoid getting stung!), to not cast a shadow by the lens, or to allow room for lighting with flash and reflectors.

But what if we still wanted more magnification? I don’t have any extension tubes yet, but I do have a Nikon TC-20E III 2x teleconverter. Adding it doubles the focal length and moves the camera back another couple inches, but does not change the minimum focus distance from the front lens element so you get more magnification.

Here is the magnification at 70mm (effectively 140mm) with the close up filter. Forgive the color shift, I forgot to turn the flash back on!

And here is the magnification at 200mm (effectively 400mm) with the close up filter. As magnified as it appears, I think it is only a 1:1.3 magnification, so almost a true 1:1 macro lens but not real magnification like a extension tubes and reverse mounted lenses could get (2:1 to 5:1 or higher). Some day I’ll get my hands on some extension tubes, set up some targets, and do some more extensive tests. For the moment, I’m quite happy with my small investment!