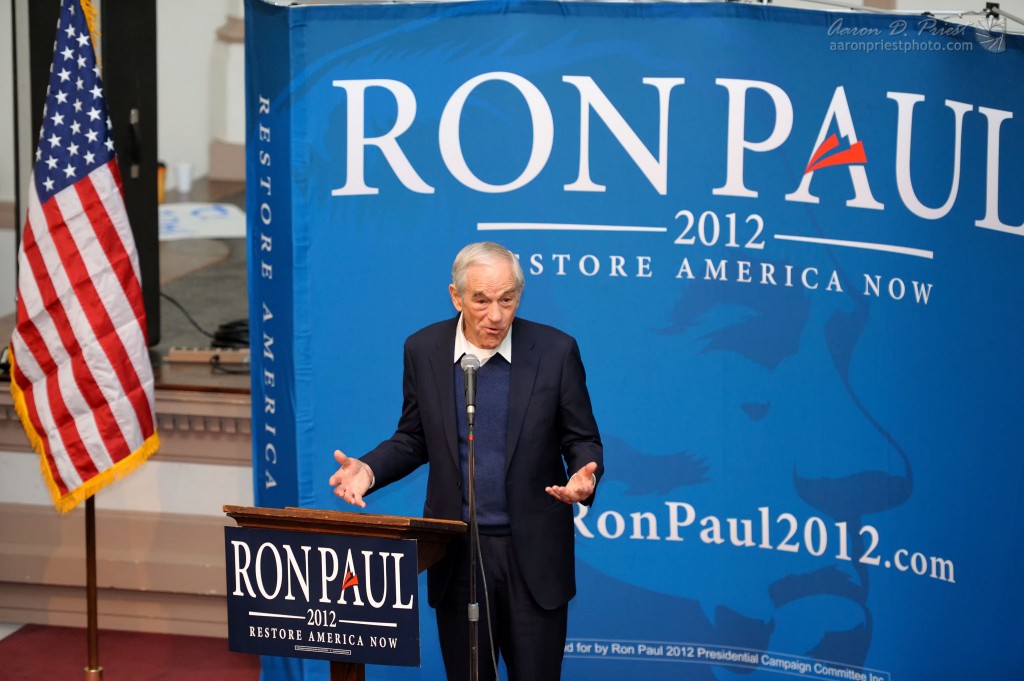 Dr. Ron Paul visited several cities on his two-day tour of Maine this week. I drove down to Bangor to get some photos and was asked if I would take the official campaign photos for everyone that wanted a photo with Dr. Paul in Bangor and Waterville. How could any photographer refuse?! đź™‚

There were a LOT of people (standing room only and overflowing into hallways and other rooms!) which surprised me since the weather and roads were so bad, and probably less than half waited in line to get photos. I wasnâ€™t quite prepared for such a task, but fortunately my batteries were all charged and I had plenty of room on a 64GB compact flash card. Unfortunately my SB-900 flash overheated about a quarter of the way through and I had to resort to f/2.8, lower shutter speeds than I would have liked, and ISO 6400+ for the rest of the photos. The Nikon D700 did an admirable job though and the photos came out very well with minimal noise reduction.

It was a lot of fun, and I have a new-found respect for those that manage functions like this on such short noticeâ€”finding venues, organizing lines for efficiency, providing security and keeping fire exits unblocked, etc., especially when 2 or 3 times the expected number of people show up!

This guy had Ron Paul sign his Silver Certificate! Unlike our Federal Reserve Notes of today that are redeemable in nothing, Silver Certificates say â€śThis certifies that there is on deposit in the Treasury of the United States of America (x number) dollar(s) in silver payable to the bearer on demand.â€ť

The event in Bangor was held at the Union Street Brick Church, which has quite an interesting history. I found this when researching the event: “The Historic Union Street Brick Church in downtown Bangor, Maine was founded in 1820. In 1834 Ralph Waldo Emerson served as the minister and Henry David Thoreau was a regular attender during that time. Famous Church members include the two term governor of Maine Edward Kent, Vice President Hannibal Hamlin (served under Abraham Lincoln) and Civil War hero and governor Joshua Chamberlain. The Union Street Brick Church has the largest steeple in northern New England.”

The event in Waterville was held at Colby College. As expected, a LOT of exuberant young folks turned out! The hallways and rooms surrounding the main hall were overflowing!

Many families got in line as well for group photos.

These images can be purchased through my gallery here:
http://galleries.aaronpriestphoto.com/Events/2012-01-27a/

These images can be purchased through my gallery here:
http://galleries.aaronpriestphoto.com/Events/2012-01-27b/